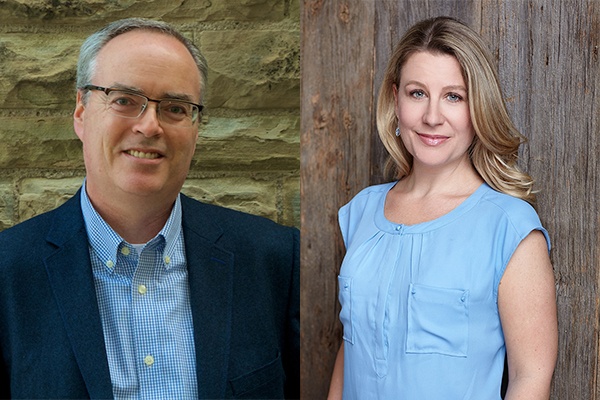 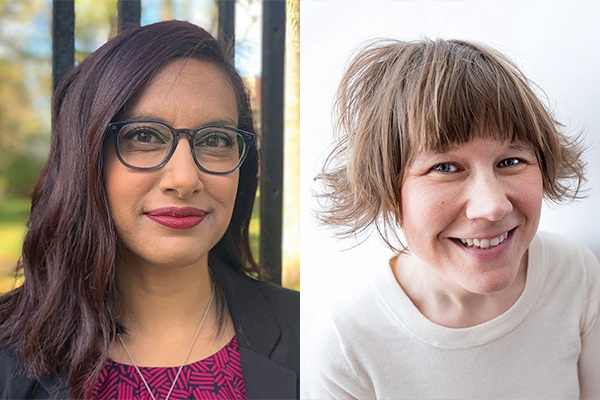 Continuing with our ‘Nod to Maud’ day (October 26th is LMM Day), this event was held in the historic hamlet of Leaskdale, where 11 of L.M. Montgomery’s 22 novels were written. Her granddaughter Kate introduced an interesting feminist perspective on Maud and her influence on female writers today. Guests celebrated Maud, and partied with some big-name authors!

Terry Fallis has won or been nominated for the Stephen Leacock Medal for Humour no less than 5 times. His novel The Best Laid Plans won the 2011 edition of Canada Reads and was named “the essential Canadian novel of the decade”. An ardent feminist and skilled public speaker, Terry is also a co-founder of Thornley Fallis, a public relations agency.

Marissa Stapley is the internationally best-selling author of three novels, which have been published around the world and translated into eight languages. She has worked as a stable hand, bartender, tropical resort destination rep, sports reporter, cemetery gardener, television listings writer, band roadie and beauty magazine editor.  Marissa has taught creative writing and editing at the University of Toronto and Centennial College. Her award-nominated journalism has appeared in newspapers and magazines across North America, including Elle, Reader’s Digest, Today’s Parent and The Globe and Mail. She lives in Toronto with her family and her bookshelves.

After a childhood raised on Bollywood, Monty Python, and Jane Austen, Farah self-rejected her writing career before jotting down a single word, despite admitting her ultimate fantasy to be a writer. When she could no longer keep the story arcs straight in her daydreams, she started writing a few years ago and has never looked back. She writes romantic comedies and women’s fiction full of huge South Asian families, delectable food, and most importantly, brown people falling stupidly in love. Prior to writing, she had careers in Human Resources and Psychotherapy. She lives in Toronto with her patient husband, surly teenager, and delightful middle-grader, along with two gerbils, one hamster, one rabbit, and a fish named Silvia.

Jessica Westhead’s fiction has been shortlisted for the CBC Literary Awards, selected for the Journey Prize anthology, and nominated for a National Magazine Award. Her short stories have appeared in major literary journals in Canada, the US and the UK, including Hazlitt, Maisonneuve, Indiana Review and Hamish Hamilton’s Five Dials. She is the author of the novel Pulpy and Midge and the critically acclaimed short story collections Things Not to Do and And Also Sharks, which was a Globe and Mail Top 100 Book, a Kobo’s Best eBook of the Year and a finalist for the Danuta Gleed Literary Award. Westhead is a creative writing instructor at the Chang School of Continuing Education at Ryerson University. Her most recent novel is Worry.

Lucy E.M. Black studied creative writing and earned an M.A. in nineteen-century British fiction. Her short stories have been published in a variety of literary magazines. She is the author of The Marzipan Fruit Basket, and Eleanor Courtown, a work of historical fiction. She writes freelance articles and has just completed a new novel manuscript on brickworks in nineteenth-century Ontario.

Home of Uxbridge’s own Lucy Maud Montgomery, the Leaskdale National Historic Site was the Ontario Home of the famous author of Anne of Green Gables.