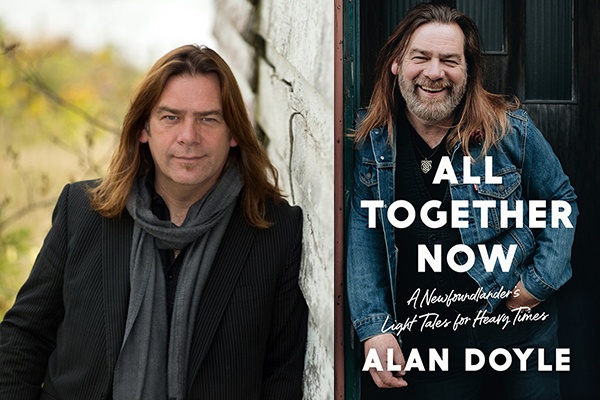 ALAN DOYLE is a Canadian musician, actor and writer. His albums as a solo artist and as front man for the Newfoundland Celtic-rock band Great Big Sea have sold over a million copies, and he has starred in such features as Ridley Scott’s Robin Hood and CBC’s Republic of Doyle.

One of Newfoundland’s funniest and most beloved storytellers offers his cure for the Covid blues in his short story collection, “All Together Now” – even the title makes one think of a song that could be sung by DOYLE’s band, GREAT BIG SEA! Is there a more sociable province than Newfoundland and Labrador? Or anywhere in Canada with a greater reputation for coming to the rescue of those in need?

All Together Now is a gathering in book form — a virtual Newfoundland pub.

You need to sign up for this virtual Pub Event on Monday, Nov. 30 at 7pm when DOYLE regales us and BIANCA MARAIS with hilarious tales that span the world to make us all feel that we are in these strange times together!

Your ticket will include a signed copy of All Together Now.